Cold winds easterly have been blowing across East Anglia for the past week, though temperatures are set to rise this weekend.  Blackthorn blossoms are flourishing in this 'blackthorn spring': their froth of cold, white flowers starting out of the rattling, winter blackness of branch and twig. 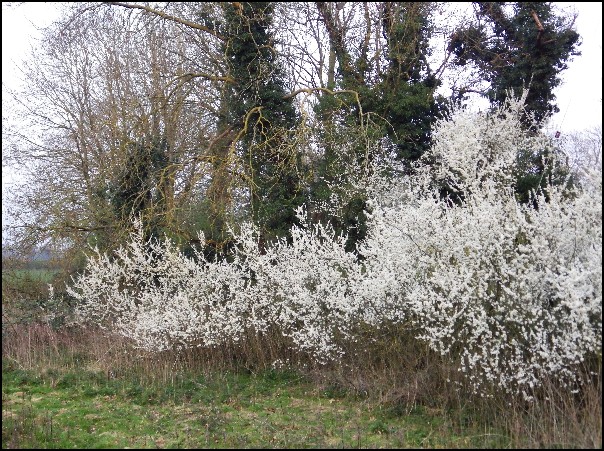 Prunus spinosa, is respected by country dwellers for its fruit (sloe gin), its hard, durable wood and particularly for its long, piercing thorns like stiletti. They are able to pass straight through clothing, gloves and even boot soles and car tyres - things I know from experience.

I now have a terrible story to relate. It was told me by my friend C. and began about a month ago when her boyfriend D. was working in a Suffolk wood. Blackthorns make bristling thickets that require careful handling. Even though he was wearing goggles, a chance branch whipped his forehead and embedded a spine in his brow down to the bone. Naturally he pulled it out, but that evening redness and swelling set in, followed later by deep inflammation. Over the following days his condition worsened as his head swelled up and he became very unwell, with symptoms similar to sepsis (blood poisoning). Luckily neighbours noticed his silent home and telephoned C. She drove over immediately and what she found appalled her; a man in delirium, shivering with fever, with a necrotic lesion on his forehead. He was taken to hospital by ambulance and given intensive care. Over the next few days the hallucinations faded - at one time he said he thought his bed was surrounded by tall trees - and his temperature subsided. It was evident that he would need a skin graft to repair the damage, but this would have to be delayed because the hospital had started dealing with a flood of Coronavirus casualties. That is the situation now: D. is waiting and convalescing, wearing a head bandage and lucky to be alive. 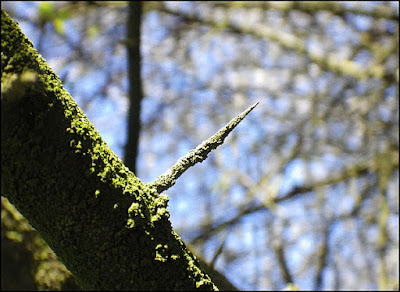 What is it about blackthorn that makes it wound so grievously?

A look through my bookshelf did not turn up much useful information.


"A scratch from the thorns would cause blood poisoning. This was thought to be because Christ's crown of thorns was made from it".(1)

"Other tannin-rich barks were also used [for making inks] particularly those of blackthorn ...".(3)

A trawl through the WWW was more promising.


"On Tuesday evening I was scratched on the hand by a blackthorn, not deeply, but enough to draw blood. Fortunately, I know about blackthorn poisoning: it can be very unpleasant. A piece of blackthorn burying itself under the skin might cause severe infection, blood poisoning, swelling and pain. If left too long before treatment, amputation might be the result. Blackthorns are covered in unpleasant bacteria. If you have a piece buried in your flesh, the best course of action is to get yourself off to the hospital if you have a rapidly escalating and unpleasant reaction; don’t leave it until the area around the wound turns black. My light scratch was reacting badly to the blackthorn toxins within 5 minutes. I sprayed the area liberally with surgical spirits on my return home, which quickly reduced the angry redness and swelling. I woke in night with the swelling raging ... ".(4)

A comment was appended to this blog post: "Our friend has just died from black thorn poisoning. Thought it was flu …".(5)

"Years ago I ignored a blackthorn wound. Within a week I had a red line running from the inside of my wrist to my elbow warning of the onset of sepsis".(6)

It is clear that blackthorn wounds can be dangerous, particularly if remnants of thorn are left in the wound. I think D.'s injury was down to more than just a bad-luck thorn-prick.

"Why do [blackthorns] cause so much trouble? Clinical research undertaken at Oakham suggests that the painful tissue reaction to blackthorn injury is not caused by infection. In fact, contrary to popular belief among the equine veterinary community, the joint is sterile after a thorn penetration. The substances that make blackthorns black are alkaloids, and this thorn contains more alkaloids than other plants. Our research indicates it is this that causes the severe tissue reactions".(8)

The website 'Botanical Online' in its 'Blackthorn Toxicity' page states that the toxic principles of blackthorn are: prussic acid (seeds, bark, leaves); hydrogen cyanide (seeds); tannins. Anecdotal evidence from online discussion forums suggests that the blackthorn is particularly poisonous during the growing season. 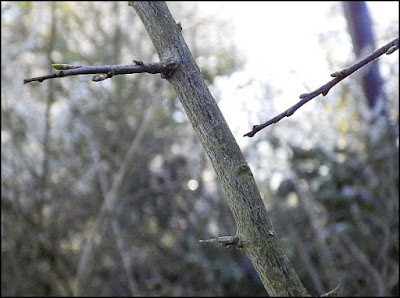 So, I suggest that what makes a blackthorn wound so grievous is that the bark and thorns at this time of the year are exuding small quantities of plant toxins known as cyanogenic glycosides, notably hydrocyanic acid (HCN, aka prussic acid), "one of the most toxic of all plant compounds. ... The occurrence of cyanogenic glycosides is widespread. Amygdalin and prunasin are very common among plants of the Rosaceae, particularly the Prunus genus".(9) Oakham Veterinary Hospital is probably wrong about alkaloid poisoning: the blackness is caused by tannins, and the toxicity is caused by HCN. The presence of other pathogens such as bacteria from bird muck may play a secondary role, although I imagine most humans and other animals have a measure of immunity against them.

HCN has been tested as a chemical weapon to be absorbed through the skin. According to a Wikipedia, a concentration of 2000 ppm will kill a human in about one minute. "The toxicity is caused by the cyanide ion, which halts cellular respiration by acting as a non-competitive inhibitor for an enzyme in mitochondria called cytochrome c oxidase".  Basically, it kills cells. No wonder D. suffered toxic shock and now has a necrotic lesion on his head.

According to the University of Maryland, "All 400-plus Prunus species are toxic to livestock. ... The most commonly recognized species are the stone fruits: cherries, peaches, plums, almonds, apricots, and nectarines. All parts of the plant are toxic except the mature fruits. ... Hydrogen cyanide acts as a poison by preventing red blood cells from releasing oxygen".(10)

I think I now understand how D. came to be so badly affected by a single puncture wound. Fragments of thorn are likely to have released HCN which led to localised cell death, followed by toxic shock from sepsis and a dermal necrosis. His immune system struggled to cope with the chemical arsenal of Prunus spinosa, and also probably the effects of some bacteria and algal detritus.

I think it would be worth somebody researching more about HCN in blackthorn For instance, I'd like to know whether it is the live or dead thorns that do the most damage. The results would be worth publicising for farmers, gardeners and any other outdoors people likely to encounter this baleful, though attractive and interesting, bush. 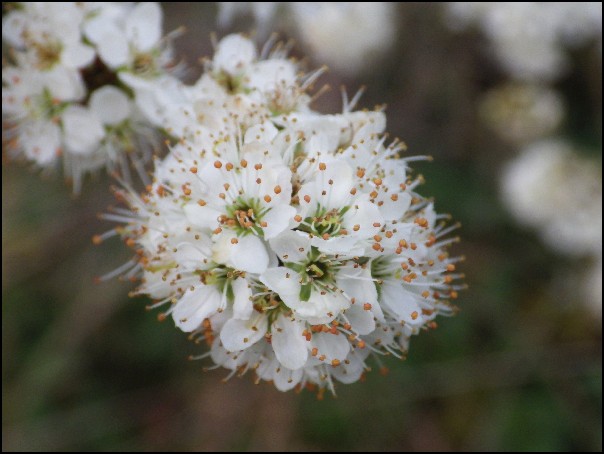 following threads of biodiversity, geodiversity and philosophy wherever they lead...

'The World is Representation'.
- Arthur Schopenhauer
'The Imagination is not a State:
it is the Human Existence itself'.
- William Blake
'Philosophy is an attempt to express the infinity of the universe in terms of the limitations of language'.
- Alfred North Whitehead
'Whosoever shall entertain high and vaporous imaginations, instead of a laborious and sober enquiry after truth, shall beget hopes and beliefs of strange and impossible shapes'.
- Francis Bacon
'The individual mind is immanent but not only in the body. It is immanent also in pathways and messages outside the body; and there is a larger Mind of which the individual mind is only a sub-system'.
- Gregory Bateson
'Everything we think we know about the world is a model'.
- Donella H. Meadows